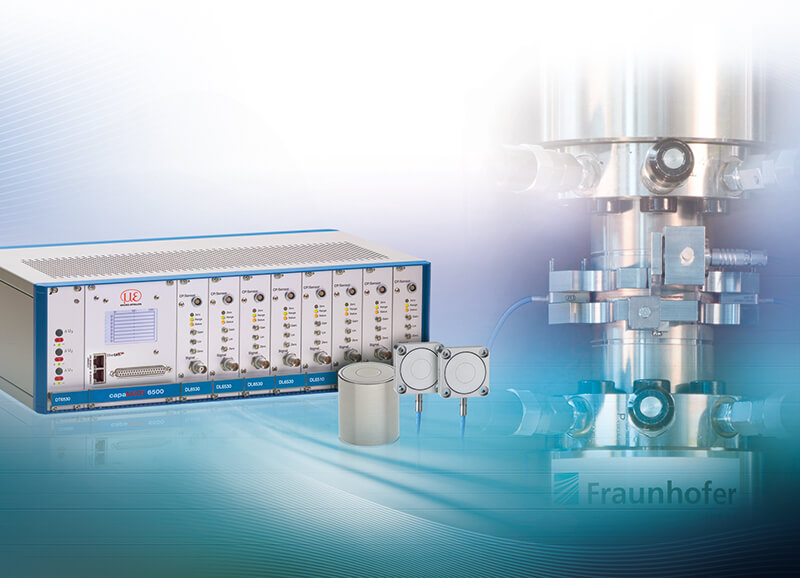 The shear and tensile strength of high strength, high stiffness structural adhesives is, among other things, inspected via a so-called double tube sample. The testing machine on the one hand displaces the samples in an axial direction and on the other, effects a torsion. Capacitive displacement sensors from Micro-Epsilon measure the minimum displacements or breakage of the adhesive bond that occurs.

In order to determine the shear and tensile strength of high strength, high stiffness structural adhesives, amongst other things a so-called double tube sample is used. For this purpose, the adhesive to be tested connects the two thin-walled tube joining parts on the front sides. Using a hydraulic tensioning device, this double tube sample is clamped in the load path of the testing machine. The layer thickness of the adhesive bond is typically only a few tenths of a millimeter. The testing machine loads the sample with tension (axial displacement) and/or torsion. Subsequently, capacitive displacement sensors with a capaNCDT 6500 controller from Micro-Epsilon measure the minimum relative displacements of the tube joining parts caused by the movements. These are just a few micrometers until the adhesive bond breaks. The measured displacements to determine the stiffness of the adhesive are only in the submicrometer range. Measuring these minimum values precisely requires a very accurate and stable measuring system.

For this measurement task, three capacitive displacement sensors from Micro-Epsilon are attached directly to the tube joining parts of the double tube sample using a special holder. Two flat sensors with a 2 mm measuring range measure the displacement in the axial direction and a cylindrical sensor measures the displacement by torsion. Due to the non-contact measuring technique used, it is easy to decouple axial displacement components and the torsion-induced displacement. The sensor signals are subsequently fed via the BNC analog output of the measuring system into customer-specific test software.